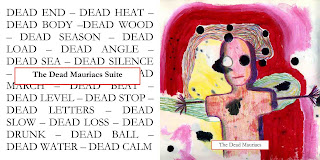 The Dead Mauriacs is a french band from Le Havre, Normandy. Members are Vincent Domeyne (Computer, Electric guitar) and Olivier Prieur (Computer, Field Recordings, Piano and other keyboards), also known for the editions L'Art Pénultième and a closed collaborator of this blog.

Released in 2009 on a limited CD-R edition of 20 under the number NPH001 and available here : 320/RAR/MU, "SUITE" is the first record of the band, highly recommended for the AliceRabbit's followers (part drone, part noise and some exquisite electronic and nonsense humour).
Tracklisting
Berceuse Indienne Fragmentée
Elégie aux grenouilles empoisonnées
Intermède
Telepathic Transmission From The Dead Mauriacs
Shup Shup Houwou

And last but not least, Olivier Prieur compiled a selection of live recordings by normand bands called Carnet de notes 25, a selection for AliceRabbit (NPH005) which will be available on the blog very soon but you can get it physically in a handsome packaging (as always with the Art Pénultième's sense of perfection and beauty) at world's best record shop (according to Felix Kubin and I) Bimbo Tower, Paris. 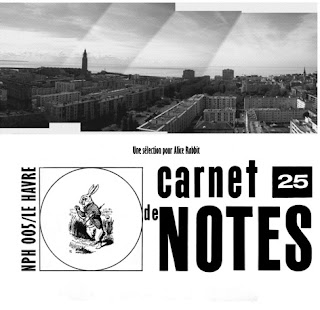