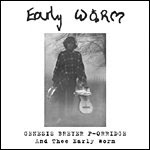 Dais Records - DAIS 001 - Limited to 500 hand numbered copies.
First ever pressing of an original recording made in 1968 and pressed to one single acetate which remained in the possession of Genesis P-Orridge's archives, considered to be he/r first ever musical recording. (discogs.com)
“EARLY WORM” was pressed at Deroy Sound Services in November 1968 even though the actual single acetate copy has “copyright 1969” written by hand on the centre label. I was away at Hull University when it arrived at my home at 6 Links Drive, Solihull, Warks. So I took it back to Hull in the new year. I hand wrote the cover quotes from “SILENCE” by John Cage. It was recorded in the roofspace attic of the house during 1968 Summer and on a weekend trip home with Jesus Joheero (Joheero pronounced - Yo’ hero, i.e. Your Hero). The sleeve notes were hand written on typing paper. Xerox enclosed. (gpo.com)
early worm

Thank you for this,I am very grateful. Tag1957

The Monocle a dit…

the link isn't working. is there a connection to mutant sounds' blog that they were asked to take it off? if possible to fix it or to send me a different link, i would really enjoy it. thanks.