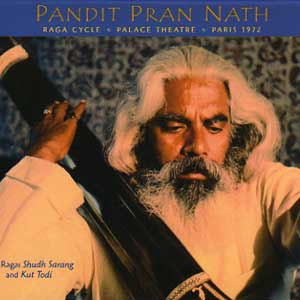 The Raga Cycle at the Palace Theatre in Paris, 1972 showcased Pandit Pran Nath at the peak of his powers. The Raga Cycle took place over three consecutive days. Friday, May 28th night ragas, Saturday May 29th, late afternoon ragas and Sunday, May 30th morning and mid-day ragas. These three concerts stand as a truly awe-inspiring monument, an example of perfection of the high Art of Hindustani music by one of the greatest masters of the Kirana Gharana. Kirana, a small village north of New Delhi, produced many of the giants of Indian classical vocal music. Among them, Ustad Abdul Waheed Khansahib, Pran Nath-ji's guru, and the immensely popular Ustad Abdul Kareem Khan. One of the undeniable beauties of Indian Classical Music is its strong connection to nature and especially the binding relationship of Raga melodies to their appropriate time of day. An elegant curve of melody, a subtle lowering of pitch, or an assertiveness attached to a particular note helps to define the effect of a Raga. There are Ragas for all the times of day and night as well as seasons, and when they are sung at their appropriate time their effectiveness is noticeably enhanced. Pandit Pran Nath's knowledge of this musical science was extraordinary and he made it his life's work to probe deeply with his expressive voice the true character of each raga using his matchless pitch discrimination and compelling emotional range.

The Wolfmen a dit…